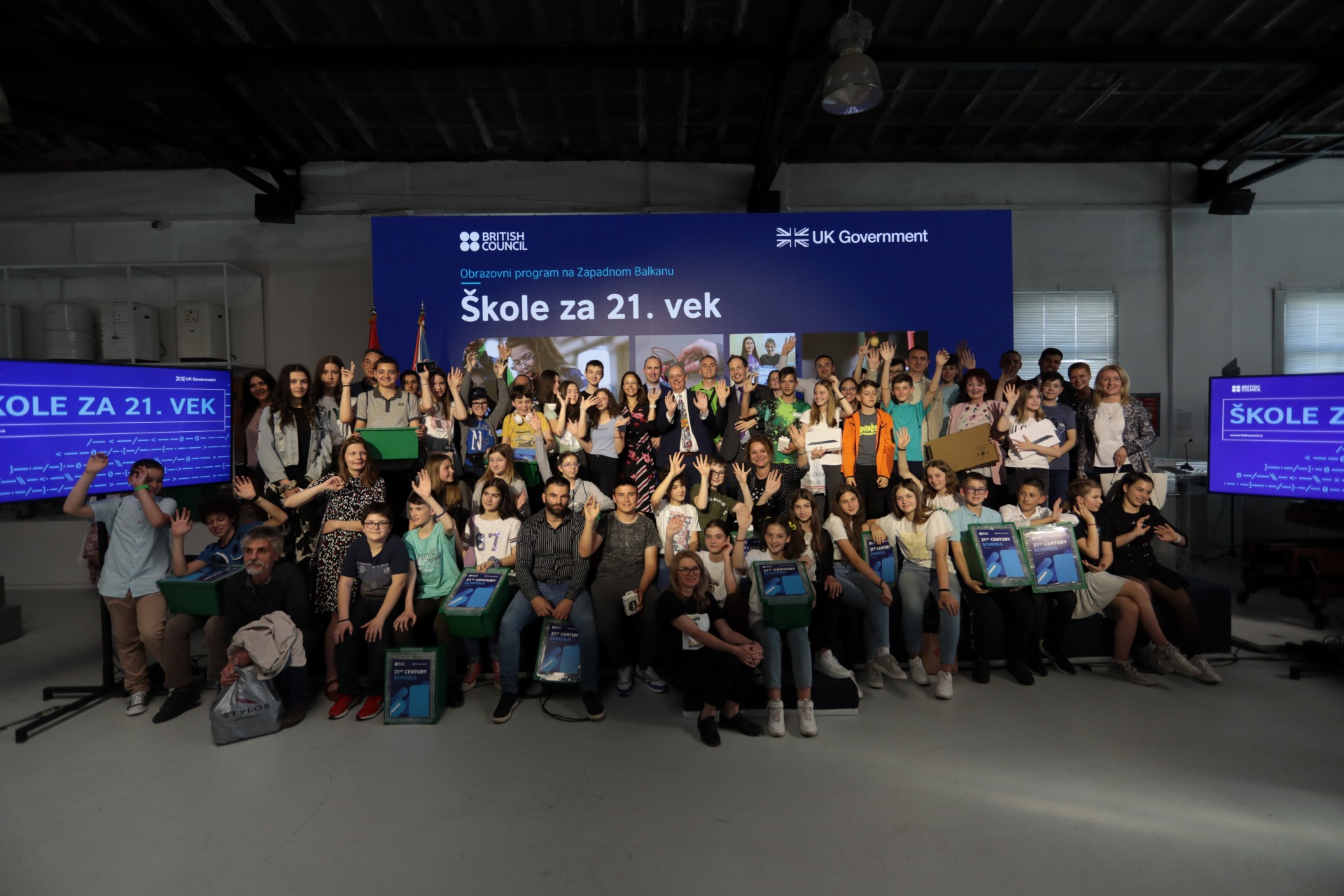 As part of the “21st Century Schools “programme, one of the largest regional education programmes on the Western Balkans, a national coding challenge with the use of micro:bit was organized yesterday. The programme is funded by the UK government and implemented by the British Council. Program achievements were presented on the occasion of the closure of the programme, and all school teams that took part at the event received valuable prizes.

The aim of this regional program is improvement of critical thinking and problem-solving and programming skills in 10 – 15 year-old students and it is implemented in partnership with the relevant national educational institutions in the Western Balkans. Also, program priorities are to create an educational environment that stimulates students to be innovative, able to exploit the potential of new technologies in their future work and thus contribute to the economic development of the countries in the region.

Clare Sears, Head of the “21st Century Schools“ Programme and Deputy Regional Director Wider Europe, British Council in her opening remarks pointed out key encouraging results achieved by the “21st Century Schools” Programme. “This is the largest educational programme in the Western Balkans region which includes all schools, more than 4.000 school leaders, 18.000 teachers and nearly a million children, as well as donation of more than 100.000 micro:bits pocket-sized computers to all schools, and it is one of the biggest investments in the education sector in last ten years. It is of huge importance that both girls and boys were included, in order to enable all students to get better prepared for future careers, when they will need all these skills.”

The Government of the Republic of Serbia and the Ministry of Education, Science and Technological Development provided full support to the programme, and the First Deputy Prime Minister and Minister of Education, Science and Technological Development Branko Ruzic stated: “By providing support to the programme we make a step forward to the smarter future for each child in Serbia since education and development of new skills is crucial for their development as individuals but also as citizens”. Minister Ruzic emphasized the importance of inclusive education. “Access to education without discrimination, bridging digital divide for each child in Serbia and development of new skills through digital learning tools is an imperative for better tomorrow. Despite crisis caused by the pandemic, with joined efforts of all partners in education sector we put focus on including children from vulnerable groups in the education system through individual approach.”

Her Excellency UK Ambassador to Serbia Sian MacLeod emphasized that IT is one of the most dynamic sectors of the Serbian economy and one of the most fruitful areas of cooperation between the UK and Serbia. In this way, partnership on this project represents investment in future. Ambassador MacLeod thanked the partners and in particular teachers and school leaders in more than 1.150 schools in Serbia who encouraged participation of more than 300.000 students during five years of implementation of the programme. “The number of girls who gained skills and confidence for career development is particularly important. These girls will build their future in science and technology”, UK Ambassador pointed out.

Twenty teams from Serbian schools took part in yesterday’s national coding challenge with the use of micro:bit. The jury had a very difficult task – to choose the best project.  All teams presented innovative and creative solutions, and the nuances decided the winners.

Team from school Đura Jakšić from Belgrade won the first place with the project Smart Classroom. With the use of micro:bit, the students showed how problem from their local community could be solved, and the team from school Jovan Cvijić from Sabac won the second place with the project Helsi (Help me see). The third place won the school Petar Leković from Pozega for the project Automatic supermarket for homeless people with hologram instruction for use.

In addition to the main awards for the most innovative projects from Serbia, there were additional three special awards. The award for the youngest team went to school Vojvoda Stepa from Belgrade for the project Toolkit for the blind people, and the school Rade Dodić from Trstenik won the special award for the best environmental project for the project the Smart Greenhouse. The school Miroslav Antić from Palic developed the most complex code and won the award for the project Smart @ Home.A panel discussion – review of the results of the “21st Century Schools” programme and the next steps was organized during the conference part of the event, with relevant speakers from the educational sector. The panellists concluded that the  “21st Century Schools” programme laid a strong foundation for further positive changes in education system of Serbia.