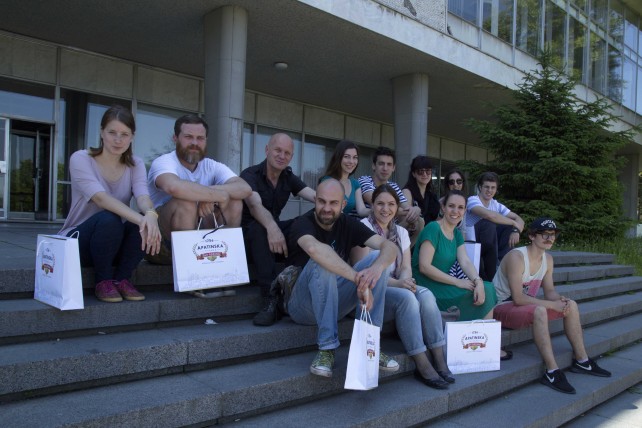 An exhibition of sculptures made of plastic bottles, prepared by graduate and doctoral students of the Faculty of Applied Arts called „Ten for 260“, was officially opened today in front of the „Museum of Yugoslav History “. The works of ten authors made in cooperation with Apatinska brewery as a part of traditional educational campaign” You should recycle too”, highlight the importance of recycling plastic bottles through artistic creativity.

Each author used 260 plastic bottles symbolizing 260 years of Apatinska brewery to create an abstract form by applying different techniques. All interested can see the exhibition “Ten for 260” until May 30.

„As a part of educational campaign You should recycle too, traditionally organized by Apatinska brewery ninth year in a row, we are trying to highlight the importance of recycling and value of use of plastic bottles. In this way, we contribute to more rationalized use of resources, but also to environmental protection, and traditionally artists from the Faculty of Applied Arts have been helping us with that”, emphasized Slobodanka Cucić, Corporate Affairs Manager at Apatinska brewery.

„The exhibition „Ten for 260“, is a confirmation of a great cooperation between us and Apatinska brewery, and this is the third jointly realized project as a part of a campaign You should recycle too. I think that exactly projects like this provide not only affirmation of the faculty, but also inspire further work of the artists, at the same time confirming corporate social responsibility of the brewery itself. The exhibition is inspired by the jubilee of Apatinska brewery – 260 years of existence and that is why we decided that each author created his/her work from 260 bottles”, stated Marko Lađušić, Professor at the Faculty of Applied Arts and Project Leader.

Through numerous projects, Apatinska brewery emphasizes the importance of recycling, and this exhibition is only one in a number of activities that are part of educational campaign You should recycle too. The campaign was launched in 2008, and so far have been organized events such as “A score for recycling” at festivals Supernatural, Green Days and Jelen Live, collecting beer cans at Beer Fest and in Guca, and educational workshops where citizens had a chance to learn about advantages of recycling.